Stupid movies at Walmart and smoking

Haven't touched this blog for awhile. It's pretty stale. Whatever, no one reads it anyhow. I was at Walmart and made a couple observations today:

1) Walmart, why not have your employees take their smoke break BEHIND the stores, not right in front of the store? The local store parking lot already smells like a giant ashtray/public mens room, so why make it worse by having a half dozen of your employees out puffing on their cancer sticks 20 ft. from the door to the store?

2) The films in your $5 bin aren't even worth $5. You should actually PAY the customers to take them, or perhaps, offer incentives to take these pieces of garbage, like 10% off if you take any film with Nicholas Cage. 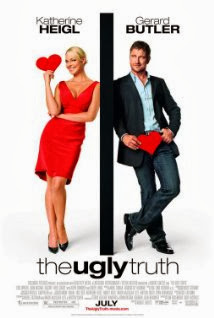 In any case, some thoughts on this cheap bin loser:

You see, it must be funny, because the woman is smart (the heart by her head shows that she's clever, because she's the woman!) but the man is stupid and animalistic, because the heart is at his groin, and men are all little more than dogs without brains.

Good thing the woman is smart and the man is stupid, because without that trite formula it wouldn't be a $5 cheap bin turd from Hollywood.

I can't stand hollywood, and I'm frustrated that I have to buy things from Walmart.  I hate supporting them when they sell stupid films like this and all of their employees just blow cancer smoke in the parking lot.  Maybe their employees are just disgusted by the stupid films they are required to sell, and it drives them to smoke?  "The Ugly Truth"?  The ugly truth is that Walmart sells a lot of garbage, and if there was a decent alternative, I'd give my money to someone else instead of this monopolitic, smoky beast.
Posted by Rational νεόφυτος at 8:44 PM 9 comments:

How Indiana Jones and the Last Crusade should have ended

I thought the same thing about the dual-relationship thing when I saw this, and found it disgusting too. Spielberg apparently thought it was funny, but I thought that this (and many other things about the film) worked to ruin it. Who thinks that a promiscuous character, and a father/son relationship with the same woman, would be even remotely funny? It's disgusting, and this was to me just the beginning of the Spielberg downward spiral. Tossing the grail to the Nazis made a lot of sense too.
Posted by Rational νεόφυτος at 9:51 PM No comments:

Interesting discussion, although the irony is that Mohler, with 2-kids, is himself below replacement rate. I didn't catch any of that mentioned in the podcast. Good thing that "other" evangelicals take care of the pesky business of fulfilling the creation mandate...
Posted by Rational νεόφυτος at 1:03 PM No comments:

This is so foul. I've seen it making the run around with Facebook, and this just blows me away how brutally forward this communist is in her agenda, and that MS-NBC backs garbage like this. If this hyphenated-last name woman would like to give her children to the State, that's her own perverse decision, but not mine.

Of course, I wonder how many people disagree with her message and yet have no qualms with yielding their children to the State school system....
Posted by Rational νεόφυτος at 8:29 PM No comments:

More thoughts on the gay issue that I so tired of hearing about...

Just left this comment at a blog I frequent,  Doubt it will see light of day, though;


Two thoughts: why does this topic seem to dominate the constant theme of folks like Al Mohler, as if there's nothing else in the world to talk about for evangelical Christians?  Is there really nothing else in the Bible to occupy our time and thought?

But here's another thought:  when we talk about homosexuality as being "subject to idolatry just as is money or possessions. With all of the emphasis we have today on sex it most certainly has become an idol to many..." are we really that much different in evangelical Christianity with the the ready acceptance that you can choose your family size and then just surgically sterilize yourself once you have 2-4 kids (the acceptable norm?)  This is just as much a sex issue, and one that should be talked about, not so taboo.  Like homosexuality, is the vasectomy-mindset really all that different?  Isn't this just redirecting the idolatry in a different direction? ("two kids was enough, and I've got other idols of self to serve, so off I go to the urologist...")  While homosexuality is constantly thrown about in discussions, no one ever seems to address the idolatry of deliberately limiting the blessing of family size in order to serve other idols of self.  Yet is Christians are honest with the Scriptures, the repeated message through the patriarchs and the OT is the blessing of children.  So if homosexuality is such a capital sin, why isn't deliberate childlessness/small families in evangelical families treated the same way?

Posted by Rational νεόφυτος at 7:16 AM No comments:

We get grace from the sacraments?

I will never understand Roman Catholicism. Centuries of corruption, torture and persecution, subdued through the Reformation and centuries of people reading the Bible and refuting catholic errors, then finally relegated to fringe cult (like Mormonism) but yet it still lingers on. I've yet to hear Trent refuted, so apparently genuine faith and repentance are still not enough... I'm still accursed by Rome.

Yet I've still yet to hear where in Scriptures the distorted teaching of Rome comes from, such as praying to Saints, worshiping Mary, and killing those who disagree with you (the later being the most heinous of catholic Scriptural perversions. Wonder where and how they get the idea of using the sword to kill others from Jesus and the new covenant?) In any case, this ad has me puzzled. How does one get grace from the sacraments, exactly? And where exactly in Scripture doe we even find the word "Sacrament" anyhow?
Or is it, much like infant baptism, a non-Scriptural distortion made up by bad theologians over time?

In any case, the RCC misses the point: you don't go "home" to Rome, but rather, you make room for the Holy Spirit to have a home in your heart, through regeneration through Christ. I pray for Rome, that the wicked distortions they propagate will clear like a black fog, giving way to the true light of the gospel...

Posted by Rational νεόφυτος at 7:38 PM No comments:

Saw this at the grocery store checkout the other day, and it elicited an audible "duh". 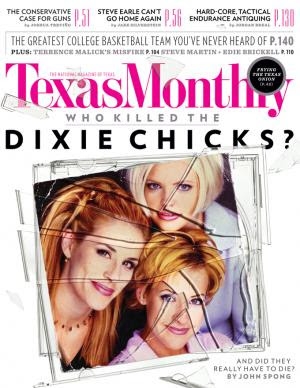 "Who Killed the Dixie Chicks?" asks Texas Monthly.  Well, duh, it's the squirrelly little one in the top of the picture with the big mouth, who decided that instead of just singing and being an entertainer, she'd instead vomit out some political diatribe against then-president George W.  Listen, I'm not going to defend Bush or Cheney or the idiotic, endless wars offshore, but I will say this, again:

If you're a singer, then sing!
If you're an actor, then act!
Leave the politics to irritating TV news personalities.

...and shut your mouth about your nonsensical and irrelevant political views, because you're dealing with a subject matter that is bound to alienate a large demographic of your audience.  I bet the other members of the Dixie Chicks really appreciated the little squirrelly one spouting off on George W.  It's like, "hey, thanks, you just ruined OUR careers as well!"

Texas Monthly, you just wasted a lot of dead trees to spread the obvious.
Posted by Rational νεόφυτος at 1:43 PM 1 comment: